Climate change is the most pressing issue facing humanity in the 21st century, and to address it requires urgent action. Yale is committed to meeting this challenge across every part of the university: through research and teaching, through the management of the university’s assets, and through reducing campus carbon emissions.

On its campus, Yale aims to reduce actual emissions to zero as soon as possible and no later than 2050. This ambition—which aligns with the international scientific consensus around the critical importance of decarbonizing the world’s economy by midcentury—represents a dramatic new commitment that over 29 years will reshape the university’s approach to the consumption of energy.

It also represents an ongoing set of experiments. As a research university, we are especially well positioned to try new approaches to carbon mitigation in service of the global energy transition; where we are successful, and where our success is emulated, Yale will play a vital part in the global effort to dramatically reduce the use of fossil fuel over the next three decades.

The university will incrementally reduce campus emissions from direct sources—Yale’s power plants and fleet, as well as purchased electricity (scopes 1 and 2). Some of the projects that help us rapidly decrease actual use of carbon on campus will reduce demand for energy, while others will reduce the carbon intensity of the energy used. Our current model suggests that by 2035 we will achieve a reduction of more than 65% of 2015 levels of actual emissions; we will update the community annually on our progress.

The judicious use of carbon offsets (also known as verified emissions reductions or VERs) to supplement the reduction of actual emissions will enable us to reach net zero emissions in 2035.

The social cost of carbon is a policy concept that provides the estimated economic cost of the destruction caused by an additional ton of carbon-dioxide emissions or its equivalent; an important model for estimating this cost was first developed by William Nordhaus, the Sterling Professor of Economics at Yale.

The projects we pursue on campus will use technologies that have a marginal cost of abatement less than the social cost of carbon. This decision-making framework allows us to strike a balance between aggressive actions and investments in on-campus carbon abatement and other priorities.

We plan to achieve targeted emissions reductions in the following ways: 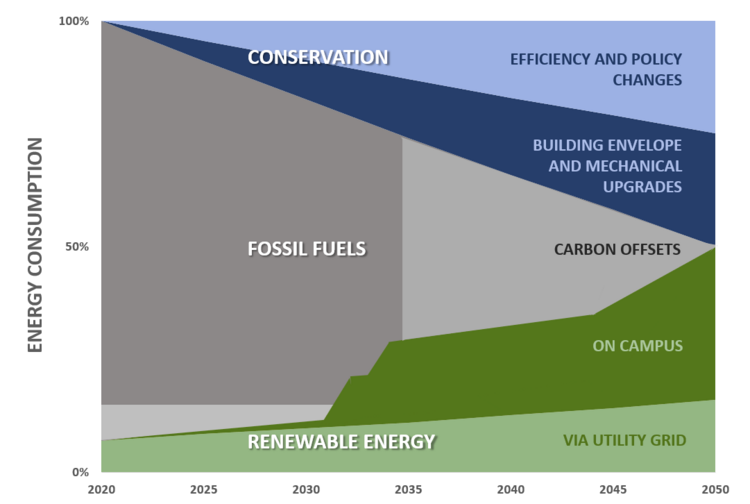 For global emissions reduction targets to be met, there must be an economy-wide shift toward efficiency and clean energy. For Yale, preparing our buildings and systems to take advantage of this shift will be a priority. Steps to do so will include:

Increased use of renewable energy

Renewable energy is the future. Already, an increasingly clean regional electric grid offers Yale the opportunity to tap into renewable energy through electrification. As nascent, promising technologies mature and prove their viability, Yale is prepared to launch large-scale efforts to transition away from fossil fuels.

Yale’s principal commitment is to reduce its actual on-campus emissions while investing in the scholarship and teaching that support the global energy transition. Carbon offsets offer another path toward greenhouse gas reductions, one that Yale will use only to supplement, not replace, on-campus reductions.

In 2020, Yale retired 48,000 metric tons of carbon dioxide equivalent (MTCO2e) of verified emissions reductions to achieve our first greenhouse gas reduction target. We will continue to retire carbon offsets annually to maintain this 2020 net emission target.  In tandem, Yale science and policy researchers will work to advance the functioning of carbon offset markets, with the hope that those markets will mature by the middle of the next decade. Assuming they do, we hope to reach net zero emissions by approximately 2035.

Addressing the urgent and complex problem of climate change requires decisive action. Such an undertaking will be logistically, technically, and financially challenging. Our plan accounts for these multiple requirements.

To meet the logistical and technical challenges of implementation, Yale will rely on its capital planning and development process to deploy projects as quickly as possible. In addition, Yale will form industry partnerships to pilot new technology in ways that accelerate its broader adoption, recognizing that, by using our campus as a living laboratory, we can help support emissions reductions beyond the university.

This plan will be expensive: it is estimated to cost approximately $1.5 billion over the next three decades. This is a living estimate, with the total investment determined by the cost of implementation and may need to be adjusted over time.

As with other uses of university resources, we are committed to the principle of intergenerational neutrality, balancing the financial burden over generations as much as possible.  In this case, that means committing that all units currently at Yale share the cost of this plan.  We will accomplish this goal through a three-pronged financing strategy:

We expect this revenue to fund approximately 10% of the investments required to eliminate campus carbon emissions—a portion that reflects these investments’ long lifespan (averaging more than 40 years).

The charge also serves to engage the entire Yale community in this effort: by ensuring contributions from the current generation using these buildings, and by offering greater understanding of emissions and a financial incentive to reduce them.

Our work on campus this decade is critical to the future of Yale. We are confident that by 2030 we will have completed a significant number of conservation and renewable energy projects and will have a clearer picture of the road to 2050. However, we recognize the many challenges that lie in our way: