Students sitting in the lounge of Harkness Memorial Hall, Yale School of Medicine, look out onto the courtyard through patterned glass window panes. But what is the purpose of the pattern?

Although ‘fritted’ glass, a form of patterned glass, was originally designed to provide sun shading, the window feature has recently become a popular design strategy for reducing bird collisions.

In 2013, the School of Medicine replaced the original single-paned windows in the student lounge of Harkness Hall with double-paned, fritted glass to improve the building’s energy efficiency and reduce avian mortality.

“It was a win-win opportunity,” said Architect Eric Overland. “We increased the lounge’s ability to maintain thermal mass while hoping to decrease the number of bird deaths in the process.” 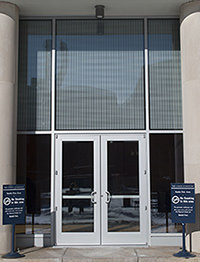 Prior to the installation, bird collisions were common to Harkness Hall, where transparent floor-to-ceiling windows spanned 15 feet, an architectural feature that was en vogue in the mid-1950s when the building was constructed.

“We picked up dead birds at Harkness for many years,” said Grounds Manager Raymond Mirando. “I’m happy to say that we haven’t picked up one since the fritted glass was installed two years ago.”

Buildings are one of the leading causes of bird deaths in the US, with fatal collisions totaling over 300 million annually[1]. Windows are one of the main culprits of collisions because they reflect visible light, which birds cannot see well, and vegetation that birds often mistake for habitat or continuous space.

Despite growing empirical evidence suggesting that external patterns on glass can deter collisions, not all fritted glass is created equal, according to Dr. Christine Sheppard, Bird Collisions Campaign Manager at the American Bird Conservancy.

“You have to have a fritted pattern that birds can perceive and that birds will avoid,” she said in an email. 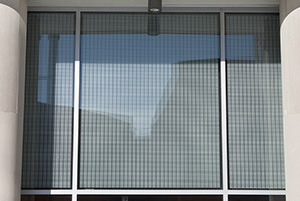 A dense frit pattern, such as the one used at Harkness Hall (see left image), can reduce bird killings. But Sheppard warns that success stories should be viewed as exceptions and not the rule.

Although there has been success at Harkness Hall, bird kills remain a widespread issue on campus.

“Bird kills have always been on our radar,” said Jim Sirch, Coordinator of Public Education at the Yale Peabody Museum of Natural History. “While we are taking preventative measures to reduce collisions across campus, we can always do more.”

Reporting bird kills is critical to identifying campus locations that pose threats to birds. If you find a dead bird, please record it on the YUBio Portal and consider donating it to the Peabody through Ornithology Collections Manager Kristof Zyskowski if it appears to be a freshly killed specimen.

To learn more, sign up for a lunchtime bird walk with Yale’s Citizen Science program! Upcoming dates are March 25 and April 14, with the Great Yale Bird Count taking place on May 1. You can also read our news stories ‘Birds in Yale’s built environment’ and ‘How nature interacts with buildings.’