April 19, 2022
Tilden Chao ’23 has spent the past year working to unravel a climate change mystery by cataloging the planet-warming refrigerants used in Yale dining halls, power plants, laboratory equipment—even dorm room refrigerators.
Refrigerant gases such as hydrofluorocarbons (HFCs) and hydrochlorofluorocarbons (HCFCs) are an under-reported contributor to global warming. In fact, these invisible and odorless gases are “climate super-pollutants,” with thousands of times the global warming potential of carbon dioxide. They leak from refrigerators and other equipment over the course of their lifetimes and can spill into the atmosphere all at once if not disposed of properly when equipment is retired.
Tilden is a junior at Yale College studying economics and working toward a certificate in the Energy Studies Multidisciplinary Academic Program. Like most people, he was unaware of the outsized role that refrigerants play in global warming until, as a 16-year-old high school student, he came across Project Drawdown’s list of 100 climate change solutions. He was surprised to see refrigerant management in the number-one slot. “I started researching refrigerant emissions and realized that even at the time, in 2018, there were technologically viable solutions to the problem.” By 2100, improving the management of refrigerant gases alone could prevent 101 gigatons of carbon dioxide-equivalent emissions, more than two years’ worth of global emissions.
At Yale, Tilden founded the Yale Refrigerants Initiative with a $25,000-grant from the Office of Facilities’ Student Green Innovation Fund, which provides awards to student projects that can measurably reduce Yale’s greenhouse gas emissions. Initially, the project focused on refrigerant emissions from mini fridges in student dorm rooms. But Tilden quickly realized that the real culprit was larger equipment used by Yale Hospitality and the thousands of refrigerators and freezers used by Yale’s research community.
With support from the Yale Office of Facilities and the Office of Sustainability, Tilden and seven fellow undergrads set out to catalog every major piece of equipment that uses refrigerants on campus. After a year of painstaking detective work, they have compiled their findings into a database that the university can use to gain a fuller picture of its greenhouse gas inventory, and that will help to achieve Yale’s goal of reaching “carbon zero” status by 2050.
In recognition of his contributions, Tilden will be one of several students, faculty, and staff honored this Earth Day, April 22, during the annual State of Sustainability Awards gathering.
“Tilden’s leadership and dedication have had a tremendously positive impact on our office’s mission of building a more environmentally and socially responsible Yale,” says Ginger Chapman, Director of the Office of Sustainability. “He’s making Yale aware of contributions to our greenhouse gas emissions for which we were not fully accounting.”
“We can’t manage what we can’t measure.”
Refrigerant leaks currently make up less than 2% of Yale’s total reported greenhouse gas emissions. That amount includes only certain kinds of refrigerant emissions (HFC refrigerants and those from large units such as power plant chillers), which are reported in accordance with standards set out by the World Resources Institute (WRI), the global standard for companies and organizations to measure and manage their greenhouse gas emissions.
What Tilden and his fellow students helped to identify were the literally thousands of smaller units—as well as those that use HCFCs and other types of refrigerants—that are not required to be reported under WRI, but that are essential to a complete understanding of Yale’s greenhouse gas emissions. When he tallied them up, Tilden discovered that accounting for these units more than doubled the proportion of refrigerants in the greenhouse gas inventory, to 4.3%. 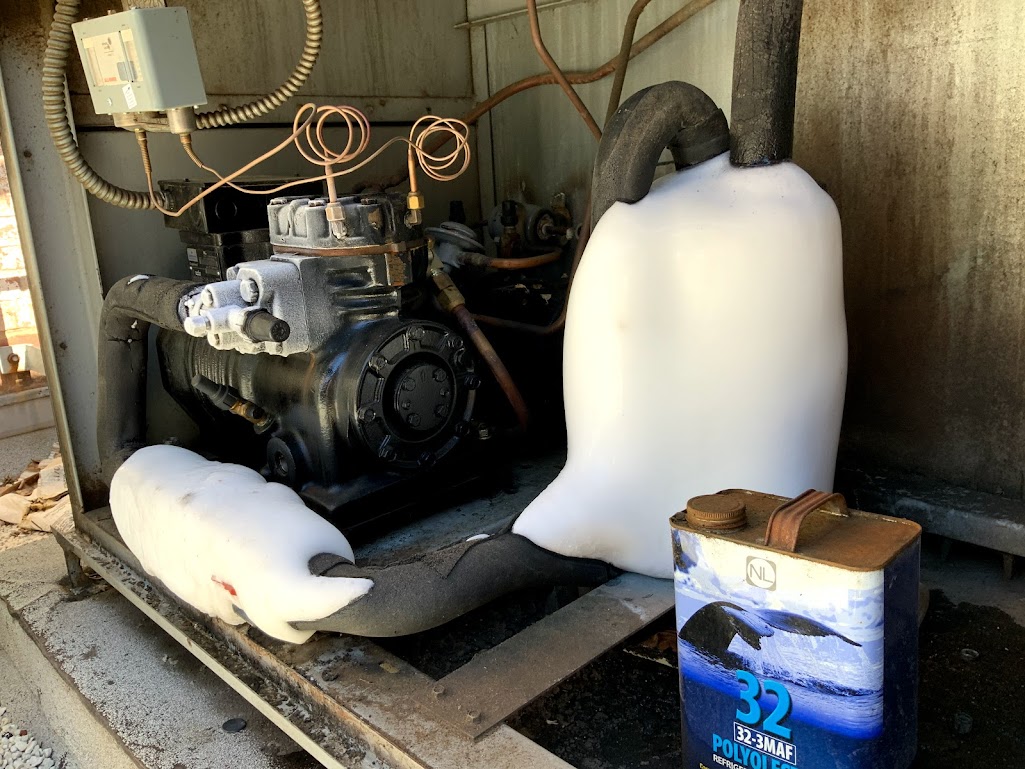 Ice build-up on a refrigerant-containing compressor rack on the rooftop of one of Yale’s residential colleges. A refrigerant leak likely caused this ice build-up. Photo by Tilden Chao
What’s more, as Yale shifts away from fossil fuels and toward refrigerant-based electric systems to heat and cool buildings, the proportion of refrigerants in the university’s greenhouse gas inventory will rise significantly. That makes careful management of these systems all the more important, says Julie Paquette, Director of Engineering & Energy Management with the Office of Facilities, who has supervised Tilden’s research.
“Heat pumps represent a really important aspect of Yale’s decarbonization strategy,” Paquette says. “We have used refrigerant and electric-based equipment to cool buildings for many decades, paired with fossil fuel-based equipment for heating. As heat pumps are adopted to both cool and heat buildings, we will increase the amount of refrigerant that we have on campus and the likelihood of leaks.”
Paquette explains that Yale will proactively retire refrigerants with the highest global warming potential and replace them with lower-impact refrigerants. At the same time, Yale is exploring enhanced systems to monitor and repair refrigerant leaks when they do inevitably happen, to keep fugitive emissions to a minimum.
Building the refrigerant database required Tilden and other students to explore dining halls, rooftops, and mechanical rooms, snapping photos of the labels that contain information about the type and amount of refrigerant used in a given piece of equipment. When units didn’t have labels, Tilden dug up old user manuals using an app called Bluon to find the relevant data. With support from the Office of Sustainability, Tilden even became an EPA Section 608-certified refrigerant handler and learned to use refrigerant-detecting sensors to “sniff” for leaks. 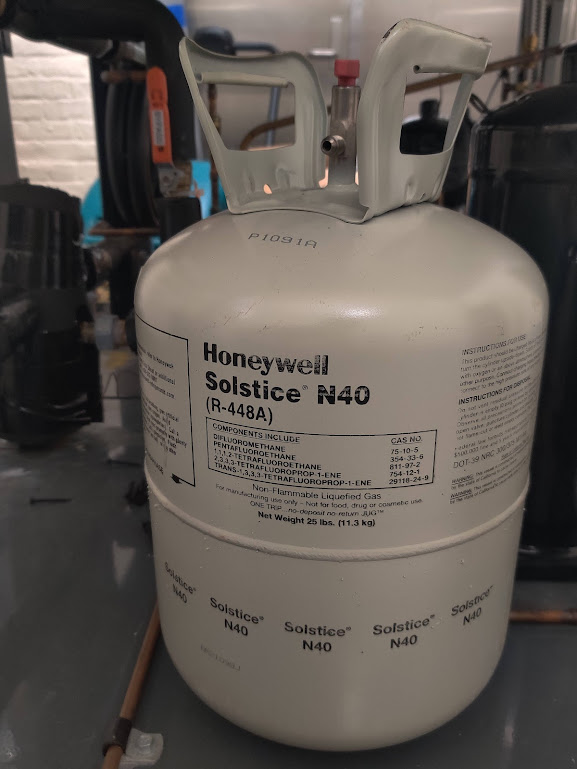 The refrigerant gas in this 25-pound cylinder, from a Yale residential dining hall, is 1,273 times more potent than CO2 on a pound for pound basis. If its entire contents were released at once, it would have equivalent impact as 15 metric tons of CO2. Photo by Tilden Chao
Tilden is energized by the work because he knows what is at stake. This month, the Intergovernmental Panel on Climate Change noted that HFC refrigerants are the fastest-growing climate pollutant in the world. Phasing down these emissions will be a critical part of achieving the Paris Agreement’s 1.5-degree warming target.
R-134a, a commonly used HFC refrigerant, is 1,430 times more potent than CO2 as a greenhouse gas. To put that into perspective, Yale’s West Campus Power Plant emitted enough R-134a last year to have the same climate impact as burning more than 1.4 million pounds of coal.
Statistics like that might inspire doom in many, but Tilden sees an opportunity. “I’m really excited about Yale’s net zero carbon goal,” he says, “but as long as we have an incomplete understanding of the refrigerant problem, we’ll never reach true net zero. We can’t manage what we can’t measure.”
Solutions and Barriers
The problem is less the refrigerant gases themselves and more about our failure to manage them, says Tilden. While there’s no zero-leak refrigerator, there are ways to minimize leaks as well as alternative refrigerants that pollute far less when they do leak.
“The harsh reality of climate change is that the very chemicals that will help billions of people adapt to extreme heat are themselves driving the climate crisis,” Tilden observes. “We need to be prepared to manage a steadily growing bank of these damaging refrigerant gases.”
Detection systems like the ones used by some grocery stores offer a potential solution, with some systems able to alert technicians to potential leaks before they even happen. Refrigerants can also be reclaimed from retired equipment and reused, reducing demand for virgin gases. Finally, some equipment can be retrofitted with new refrigerant blends that have half the global warming potential of the most common HFCs.
The Yale Refrigerants Initiative is the first project of its kind in the country and Tilden has shared his research as a best practice with other universities in the Ivy Plus Sustainability Consortium. He also researches global cooling and refrigerant gases at the Yale Carbon Containment Lab.
“Refrigerants are an unexpectedly exciting and powerful solution to climate change,” Tilden says. “With the information that we’ve gathered here on campus, we can develop new, targeted solutions for a problem we previously didn’t know existed at this scale.”