Many labs contract with chemical companies to access a resource which is literally all around us. Perhaps more surprising, this is standard practice.

The resource is nitrogen, and it’s useful because it does nothing. Some delicate electronics can be damaged if exposed to raw air, which contains highly reactive oxygen. To preserve such equipment, labs typically use ‘dry boxes’, sealed boxes with large rubber gloves built into their sides. The box can then be flooded with inert nitrogen gas, enabling delicate materials to be handled safely. 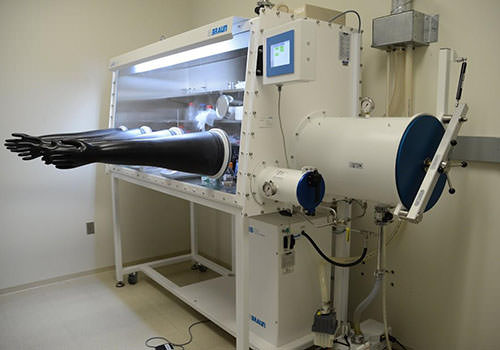 Most often, labs purchase liquid nitrogen and ship it where it’s needed. Yet, around 78% of the air we breathe is nitrogen gas. We spend money and increase our greenhouse gas emissions to access a gas in which we practically swim.

On Yale’s West Campus, the Energy Science Institute will be doing plenty of work requiring inert conditions. Across two open-concept centers, the Institute is dedicated to interdisciplinary study of new materials for solar energy conversion and energy storage. With both office and lab spaces, the Institute brings people together to reimagine how we use energy on a day-to-day basis, with an eye towards maximizing efficiency. As an institution deeply concerned with efficiency and sustainability, standard practice for acquiring nitrogen doesn’t suffice, especially considering the associated carbon impacts of shipping.

“At the end of the day, the product itself is cheap. Liquid nitrogen is a fraction of a cent per liter,” explained Chris Incarvito, Director of Research Operations and Technology on West Campus. Hence, many institutions choose to simply purchase nitrogen. “But [the companies] are dealing in volumes. It doesn’t mean that the process is inexpensive…and there’s a cost to us, because our sample set is small.”

Instead, the Energy Sciences Center II has a massive room dedicated to a device which extracts nitrogen gas from the air and compresses it on-site. The resulting product is sufficiently pure (>99.9998% pure) and can be made in a large enough volume to satisfy the ESC-II’s nitrogen demand. In fact, the process is quick enough that the machinery generates nitrogen based on the lab’s current demand, adjusting production rates in real time. The project will lead to savings since it reduces the need to lease tanks for nitrogen storage, and reduces costs associated with shipping. The installation is estimated to pay for itself in about seven to eight years. 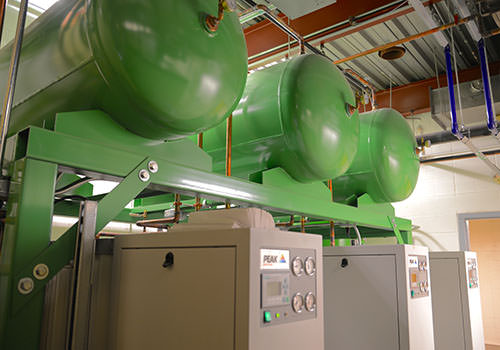 Having one less truck making deliveries on West Campus also led to greater efficiencies in the design of the campus itself. Roads didn’t need to be large enough to accommodate a massive truck coming in to deliver liquid nitrogen. Smaller doors, smaller site pads, smaller turning radii in roads (meaning less asphalt) – once the need for nitrogen delivery was eliminated, the site design developed naturally to conserve even more resources.

Plus, this method of considering resources is different, and it further reinforces West Campus’s ethos of approaching problems from a fresh perspective.

“It’s a spark to help people think about what is possible within the building that is not directly related to anyone’s research…It can help people think differently about how they’re going to do a certain reaction,” Incarvito said. Being put in an environment which challenges convention encourages further challenges to the status quo.

More broadly, the Institutes on West Campus were designed to foster interdisciplinary thinking and collaboration. There is an open lab space shared between professors from BME, Physiology, and MCDB – people in distinct departments work at adjacent benches. Complex microscopes are shared between materials science and biology researchers, not only reducing equipment purchasing but also fostering more opportunities for researchers in these fields to cross paths. Collaboration happens everywhere, but the layout of West Campus hopes to act as a catalyst to make it faster. As West Campus develops and Yale faculty begin to discover the possibilities that the new space is unlocking, Incarvito thinks great strides forward will be made.

“[West Campus] is aligned with what everyone else is doing [at Yale],” remarked Incarvito. “[West Campus] is open, all are welcome. Many projects are born from somewhere else at Yale; the missing link had been the space to do it.”