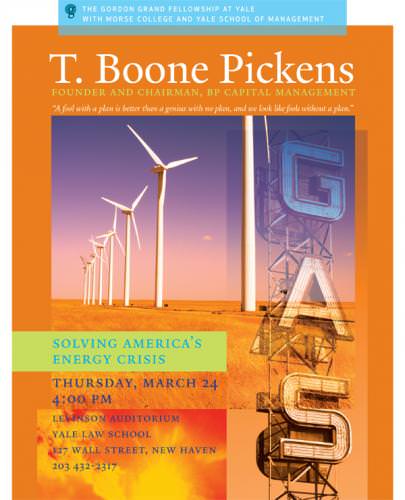 T. Boone Pickens will deliver the Gordon Grand lecture, which is free and open to the public, on “Solving America’s Energy Crisis.”

Described by CNBC as “the Oracle of Oil” for his ability to predict oil and gas prices, T. Boone Pickens has spent the last three years lobbying for a comprehensive plan to reduce American dependence on foreign oil. The “Pickens Plan” calls for switching to natural gas for transportation fuels and investing in renewable energy sources such as wind farms and solar energy.  Pickens, who is founder and chair of BP Capital Management, also authored a best-selling autobiography, “The First Billion Is the Hardest.” He is a frequent guest on some of the nation’s most-watched business programs.