Yale’s Sustainability Strategic Plan promotes sustainable land development and maintenance within Yale’s built environment. To accomplish this goal, Yale’s Grounds Maintenance team has recently undertaken three major landscaping projects: the creation of ‘urban meadows’ on campus to serve as outdoor areas, the incorporation of groundcover in Yale’s landscaped areas to mitigate stormwater runoff, and the aeration of Yale’s grounds to improve turf health and appearance. These sustainability efforts not only help Yale meet its sustainability goals, but also provides members of the Yale community with opportunities to experience nature in Yale’s backyard.

Parks and green spaces are fairly easy to come by at Yale with East Rock, West Rock, and many others located five miles or less from the heart of campus. Thanks to the creation of urban meadows on campus by Yale’s Grounds Maintenance team, interacting with the natural environment is now even easier.

A map of the urban meadows directs visitors to the seven meadows on Yale’s campus. All are located on Science Hill and take the form of fields or berms. The meadows, which require less upkeep than standard grounds, are only mowed a few times each year. Selective mowing promotes sustainability through:

Tweet a photo @YaleSustain when you visit one of Yale’s urban meadows!

The Grounds Maintenance team has devoted the past year to expanding the use of planted groundcover on campus. 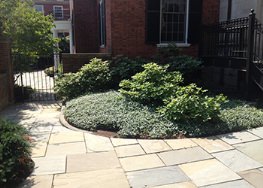 The team recently added about 50,000 plants to improve the appearance and functionality of Yale’s grounds. The plants replaced the more common form of groundcover, mulch.

Replacing mulch with vegetation makes Yale’s grounds less susceptible to weeds and damage from runoff. It also reduces equipment use and helps keep chemicals out of storm drains. Look for additional groundcover to be planted this fall as this beneficial effort continues.

Have you ever wondered where the wads of soil on Yale’s grounds come from? Those plugs of soil are a product of aeration, another form of sustainable landscape maintenance. 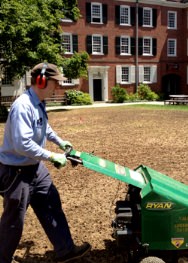 Yale’s Grounds Maintenance uses both coring and solid tine aeration techniques on campus. This creates thick, resilient turf that is less susceptible to disease and requires less water and nutrients to thrive.

Maintaining aesthetically pleasing, functional, and healthy grounds is no small task. Doing so requires a lot of practice, research, strategic planning, and hard work from Yale’s Grounds Maintenance. As we enjoy the fruits of their labor, we should make sure to be good stewards of our backyard and respect Yale’s beautiful green spaces.