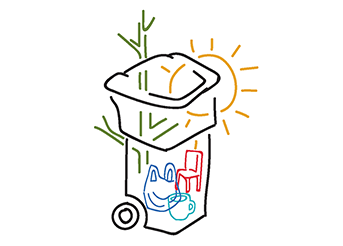 December 2, 2019
As Yale works continually to reduce waste on campus, significant progress has been made toward one of the Yale Sustainability Plan 2025 goals: the Pay as You Throw (PAYT) pilot program. A first-of-its kind pilot among American higher education institutions, the pilot was focused on a simple question: if a price tag were attached directly to the amount of trash we throw away, would we be incentivized to reduce our waste and improve our recycling practices?
Yale departments are currently charged for waste removal based on their building’s square footage, which is not necessarily proportionate to the amount of waste generated.
To assess the drivers of behavioral change, a Task Force composed of faculty, staff, and students challenged this existing pay scheme by breaking up participating buildings into three test groups:
1. Traditional Charge: These buildings received a monthly statement showing the current charge based on their square footage compared with a new, hypothetical charge based on their waste generated.
2. Traditional Charge Plus Information: This group of buildings received the monthly statement of the new, hypothetical charges as well as information about waste best practices, support for improved signage and infrastructure, and ideas for reusing materials instead of throwing them away.
3. Reputation: Geared towards the residential colleges, this treatment tested whether reputation is enough to drive behavior change. Four colleges participated in a recycling competition, and the winning college received a study break.
The PAYT pilot took place from January to April of 2019, and the results indicate that data and information help change behavior when it comes to waste generation.
The pilot showed that the Traditional Charge Plus Information group saw a dramatic reduction in waste and increase in recycling. Participants valued having access to data, educational materials, and programming ideas.
There were also notable takeaways from the other treatment groups. Participants in the Traditional Charge group appreciated the limited data they received, which inspired dialogue and questions about how to improve waste management. However, while waste collectively decreased in this group, so did recycling.
Silliman College was the winner of the competition in the Reputation group, showing the largest improvement in waste diverted. However, all colleges in this pilot decreased their waste and increased their recycling. Notably, there were some data discrepancies month-to-month due to improperly registered weight from some pickup locations, but the data recovered did show an improvement in both recycling and waste diverted.
The pilot also showed that a university-wide traditional PAYT scheme would require significant changes to the infrastructure of Yale’s waste system. Because a PAYT model seeks to charge buildings based on the amount of waste they produce, better ways of differentiating waste production will be needed. For example, employing separate dumpsters or specific weighing systems for each building could make the model more feasible campus-wide.
Furthermore, data discrepancies suggest an opportunity for improved methods of collecting waste metrics, either through technology or infrastructural upgrades.
Moving forward, the Office of Sustainability will collaborate with Facilities and other key operational groups to integrate lessons learned from the pilot to inform future programming and decisions around waste management at Yale. After all, waste is just a resource out of place.
Yale is committed to building a more sustainable world. By doing what we do best—integrating science, the humanities, and our community—Yale creates, tests and adopts innovative solutions to the environmental and social challenges we all face.