Cigarette butts are often mistaken as less harmful than other litter, but they contain nonbiodegradable materials and toxic chemicals that threaten wildlife. In an effort to decrease litter and promote Yale as a Tobacco-Free Campus, Tobacco-Free Yale is hosting the Bulldog Butt Hunt, a volunteer collection event during Earth Week.

The top two goals of the tobacco-free campaign include consistent community outreach and increased awareness of free cessation programs available to Yale staff and their families. The final goal is to have a completely tobacco-free campus—which equals no designated smoking areas.

“We are out there meeting with groups talking about cessation products and supporting people in their quit attempts, while trying to create a compassionate culture here at Yale,” says Lisa Maloney, director of media strategy & project management at Yale.

The Yale Medical School campus is a current target to improve cessation rates and reduce smoking.

“While there are currently designated smoking areas throughout the Medical School campus, there is also a high prevalence of smokers in smoke-free areas, particularly at loading docks, benches, and around the Phyllis Bodel Child Care Center,” says Lisa Kimmel, senior wellness manager of Being Well at Yale. “We will continue to strengthen our outreach efforts and provide smoking cessation information in these particular areas.” 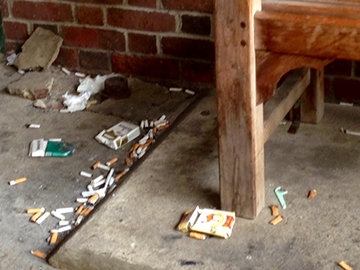 Reducing tobacco use on campus will also help reduce litter.

Cigarette butt litter is more than an eyesore. Cigarette butts pollute local rivers, lakes, and the Long Island Sound by entering stormwater runoff. According to the Cigarette Litter Prevention Program, an initiative of the nonprofit Keep America Beautiful, tobacco products account for 32 percent of the litter in storm drains.

Furthermore, 95 percent of cigarette filters are composed of cellulose acetate, a form of plastic that does not degrade quickly and can persist in the environment.[1] The plastic, along with toxic chemicals released from cigarette butts including nicotine, benzene, and cadmium pose a threat to fish and wildlife.[2]

In celebration of Earth Week, Tobacco-Free Yale is teaming up with the Yale Office of Sustainability and Being Well at Yale to sponsor the Bulldog Butt Hunt, a tobacco litter collection activity, at the Yale Medical School campus. The event will take place on Tuesday, April 18, from noon to 1 p.m., in front of the Anlyan Center on Cedar Street and all interested in volunteering are encouraged to register. Participants will be provided with gloves and collection bags. A special appearance of Boola the Bulldog will kick off the event and all participants will receive a free insulated bag.

The event aims to raise awareness around the amount of litter present on campus and its adverse effects.  “We hope members of the Yale Community will come out even for just half an hour to hunt down some cigarette butts,” says Maloney.