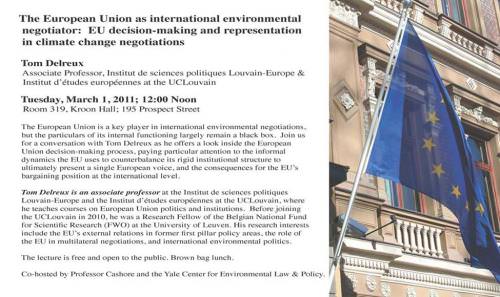 Join us Tuesday, March 1, for a brown bag lunch with Tom Delreux, Associate Professor of Political Science at the University of Louvain-La-Neuve, Belgium. Delreux will offer a look inside the European Union decision-making process, paying particular attention to the informal dynamics that the EU uses to counterbalance its rigid institutional structure and present a single European voice. He will focus on the recent climate change negotiations as an example.

Tom Delreux is an associate professor at the ‘Institut de sciences politiques Louvain-Europe’ and the ‘Institut d’études européennes’ at the UCLouvain (Louvain-la-Neuve, Belgium), where he teaches courses on European Union politics and institutions. Before joining the UCLouvain in 2010, he was a Research Fellow of the Belgian National Fund for Scientific Research (FWO) at the University of Leuven (K.U.Leuven, Belgium). His research interests include the EU’s external relations in former first pillar policy areas, the role of the EU in multilateral negotiations, and international environmental politics.

For more information contact Susanne Stahl at susanne.stahl@yale.edu or 203.432.5594.