What is a sustainable food system?

When considering sustainable food choices, there is a plethora of philosophies and trends. Any number of influencers and food gurus will speak to the merits of organic products, locally sourced commodities, and even slow food – which consists of menus that are prepared in accordance with local culinary traditions, typically using locally sourced ingredients. Possible confusion over best choices can be compounded by the array of food certification programs, such as Fair Trade, Certified Humane, Marine Stewardship Council, and USDA Organic. However, there is no checklist or equation that defines a sustainable food system. Mark Bomford, Director of the Yale Sustainable Food Program based on Yale College, explains that food systems are “contextually specific” despite the globalization of food production, distribution, and consumption.
“We live on an incredibly diverse planet, and the ways we produce and consume food are incredibly diverse as well,” Bomford says. He explains that different places might struggle with or prioritize different aspects of sustainable agricultural production – like water availability, soil fertility, and biodiversity - based on their location. Similarly, economies and local knowledge and practices differ, which ultimately change what ‘sustainable’ means to particular communities.
Despite the lack of a one-size-fits-all approach to governing food systems, our experts identify a few basic principles needed to advance a sustainable food system. “A sustainable food system is one that is environmentally, economically, and socially sustainable,” says Kristin Reynolds, critical food geographer and Lecturer at the Yale School of the Environment “Further, we can’t consider a food system – whether it is at a community or global scale – to be sustainable if it doesn’t ensure racial equity, economic justice, and human rights for everybody.” Bomford adds that interaction of these principles must be dynamic, saying that a “sustainable food system is the one that is the most adaptive, responsive, open to change and ready to be reinventing itself every single day.”

What are some of the major problems with our food systems?

There is potential for disruptive factors at every point in the food system: from agricultural processes to the economic, socio-cultural, and political forces that influence it. A major root problem is that farmers have little say in what is produced, or where and how it is produced and sold around the world. Trade policies of major governments like the United States dictate what can and cannot cross borders, which Bomford says has “profound influences on how people farm and how people eat everywhere around the world.”
In addition, Reynolds explains that many small farmers are forced to give up eco-conscious agricultural practices for the sake of being profitable in a large global market with stringent trade policies. “If farmers want to engage in sustainable farming practices, they may be limited in these efforts by the imperative of short-term economic returns in order to remain in agriculture.”
Reynolds points out a third problem, which is that in wealthier countries, overproduction in industrial agriculture leads to wasted environmental resources and contributes to the food system’s global carbon footprint. “For example, producing food that is lost through spoilage before it reaches consumers wastes land resources, water resources, and soil resources, which are declining in our era of climate change,” Reynolds says. “When we get to the post production, then we’re also looking at the wasted resources, largely petroleum-based, that are used to package and transport it.” 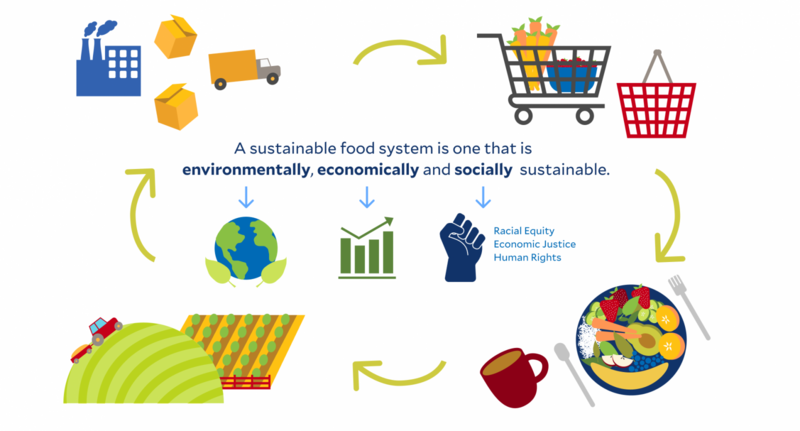 If we stopped wasting food, would we produce enough for our global population?

It is not uncommon to see dramatic figures in the news such as 25 to 40% of food produced being wasted. This is thought-provoking, but both Bomford and Reynolds point out that it is overly simplistic to think that if everyone stopped wasting food, world hunger would be solved.
First, supply chain and access issues would come into play. Structural inequities in our society are woven into the food system and pose major challenges to achieving one that is sustainable. Reynolds explains that economic inequalities and structural racism, for example, can create what is known as food apartheid, which denies Black, Indigenous, and people of color access to healthy, fresh, culturally appropriate and affordable foods. Bomford goes further by suggesting that it is not only a question of whether or not individuals have access to food, but also whether or not they live in a democracy and have a choice in the food they get.
“As soon as you obstruct the flow of information by suppressing a free press or succumb to tyranny or propaganda with the absence of effective political opposition, there is no effective way to have a say in where your food comes from,” Bomford says.
Second, in the current scheme, there is a significant disconnect between what would be needed and what is being cultivated. “Most of what we produce calorically is livestock feed or is going towards biofuels like corn ethanol,” Bomford says. “It’s not a case of just imagining a completely equal distribution of all of the food that we produce on the planet and everyone would be fed, because everyone would have a lot of feed and corn, and that wouldn’t be healthy.”

How can individuals help to advance a sustainable food system?

Addressing these challenges and advancing a sustainable food system will take an integrated, multi-disciplinary approach that takes the entire system into consideration. While it may seem intimidating to get involved with a global systematic issue, Reynolds suggests starting by reading the food policies or plans in your local area and reflecting on how your own consumption habits help or hinder their respective goals.
“Try to understand and reduce your environmental impact in the way that you eat, to the extent that it makes personal and financial sense for you, whether this is through changing your consumer habits or minimizing waste (or both) ” Reynolds says, adding that if it is affordable, try purchasing from smaller, locally owned stores and ecologically-focused farms.
Reynolds also advocates for making use of informational resources— from news outlets and websites to books and documentaries— to gain a better understanding of the systemic nature of inequalities in the food system, the growing number of local or policy initiatives to address them, and diverse ways for consumers to support this work.
Bomford suggests that individuals can seek creative ways to work together with others on a shared food-related goal.
“Figure out how you can play a role as part of a much larger movement in cooperation socially, culturally, politically, with others around you,” Bomford says. “Whether that is with the people around you, or whether that’s with the land or the places that you cherish, choose to work on something that is bigger than yourself.”

What Is Yale Doing?

Throughout each semester, Yale Hospitality offers Food Conversations, a popular series of on-campus dialogues between students and renowned culinary experts from around the world. Together with their peers, students meaningfully reflect upon global food challenges and culinary traditions through personal discussion, multi-cultural cooking demonstrations and many rounds of taste tests. Around campus, student can also take part in the following initiatives:

If you have work that you’d like to be included in the “What Is Yale Doing” section of any of our articles, please contact Scot Bearss to submit your proposal.